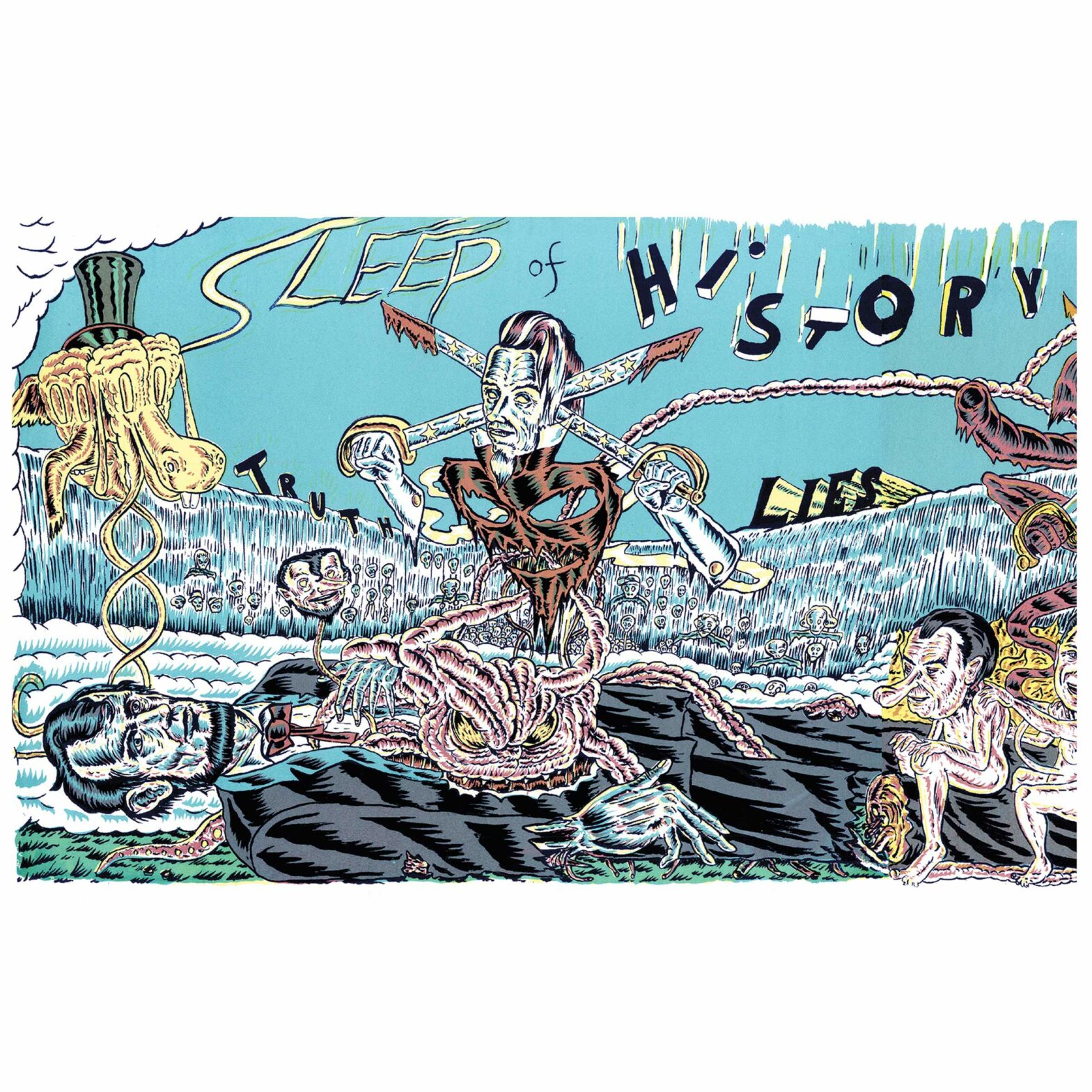 Booklyn is pleased to present an exhibition of artists’ books, prints, paintings, and drawings by David Sandlin. The exhibition centers on Sandlin’s most recently completed volume of 76 Manifestations of American Destiny—Mythic Heroes, Mythic Villains—and includes ancillary artworks associated with the series. Also on display will be selections from the artist’s extensive output of silkscreened artists’ books, Risograph ’zines, and offset publications created over the past 35 years.

Sandlin’s illustrative style is vibrant in color and masterful in execution, each line rippling with humor, wit, and intelligence. The artist’s approach to cultural and political commentary draws from masters of satire, including Goya, Gilray, and Dix, as well as elements of 20-century comics. The visual narrative, often nonlinear, a core component of Sandlin’s work, is used as a structural device to build content and express ideas while experimenting with form.

Sandlin’s most recent project, 76 Manifestations of American Destiny, includes three volumes of a proposed series of six hand-screen-printed artists’ books. Each volume is housed within a hardcover case, and while each print within can function as a stand-alone artwork, when bound together into an accordion-folded book, they create a compositional narrative stretching 27 feet long.

The series is inspired by the woodblock prints of the great 19th-century Japanese artist Taiso Yoshitoshi and his masterwork One Hundred Aspects of the Moon. While Yoshitoshi’s subjects were famed Samurai warriors, tragic lovers, and notorious scoundrels, Sandlin’s analogs are U.S. political and military leaders, environmental disasters, and tabloid sex scandals. With this series, Sandlin is exploring aspects of American history and legend that still haunt the present, including once moribund—or at least buried—ideologies recently revivified by nativists, nationalists, and the like, such as manifest destiny and American exceptionalism.

The juxtaposition of this series with supplemental screen-printed artists’ books, Risograph zines, and offset publications shows alternate printing and binding techniques the artist uses in sharing visual narratives as affordable and accessible works of art. The inclusion of these publications illustrates how themes relating to American culture, politics, history, and Sandlin’s personal biography are interwoven throughout the artist’s oeuvre and across media. “As a maker of prints and books—the perfect media of democratic subversion for being cheap, reproducible, and transportable—I want to do my part,” states Sandlin.

David Sandlin is a painter, printmaker, and comics artist born in Belfast, Northern Ireland, and living in New York City. He has exhibited his paintings and prints extensively in the U.S. and internationally, and his comics and illustrations have appeared in The Best American Comics, The New Yorker, Raw, and other publications. He has received fellowships and grants from the Guggenheim Foundation, the Cullman Center for Scholars and Writers, the Pollock-Krasner Foundation, the New York Foundation of the Arts, the Swann Foundation for Caricature and Cartoon, and other institutions. He teaches printmaking, book arts, and illustration at the School of Visual Arts in New York City.