Clarence Robbs (1964-2021), better known as CUBA, is the primary founder of the lettering ‘Wild-style’ graffiti movement that rose in popularity in the San Francisco Bay Area in the 1980s and ’90s. Primarily tagging and painting murals with the name CUBA (or, KUBA), he has also tagged and painted under the aliases Imagine, Salsa, Work, and Utopia.

In the early 1980s, he left Baltimore and brought his high-color, high-density, layered writing style to the Bay Area, where he has painted over 600 murals. Upon arrival in San Francisco, CUBA became a founding member of the acclaimed Clarion Alley Mural Project (Clarion). Clarion created and continues to create works of art on the face of Clarion Alley, rendering an alley with a long tradition of arts and community action (historically it has been a site of labor organization and artist Happenings) into an always-evolving gallery. Due to his ubiquitous presence on the streets of San Francisco, CUBA is seen as one of the godfathers of the last coherent school of this American art of the 20th Century, the Mission School scene.

CUBA’s street presence made an impression on street writers and artists such as Barry “Twist” McGee, Chris Johanson, Rigo23, Aaron Noble, Julie Murray, among others.

CUBA’s interest in the book form stands out as innovative and unique among graffiti artists. He is one of the few artists of his kind who has used the unique Wild-style lettering forms as fonts for his own narrative texts as well as other poets' writing. He goes well beyond most graffiti writers’ use of sketchbooks as he has explored graffiti typography as a means of conveying complicated scenarios of urban culture.

CUBA has become a pioneer in the world of Artists’ Books as a Native American/Caribbean/African American artist. This breaks the Euro-centric predominance in the Artists’ Books world.

CUBA is an innovator in the exploration of typography and letterform. His work stretches the limits of convention and introduces new aesthetics to the field of fine press typography and book design with a force reminiscent of early futurist and Dadaist typographical interventions.

CUBA’s work is imbued with the underground street culture and radical politics. CUBA’s particularly positive outlook has redefined graffiti in San Francisco as a part of urban development and neighborhood conservation as much as a record of it. The community in San Francisco celebrates graffiti, and CUBA is a large part of that celebration. His work is collected internationally by librarians and museum curators and private collectors.

CUBA’s unique (edition of 1) hand-painted books give his audience an exuberant reading of social commentary and hundreds of new letterforms. By collaborating on artists’ books with stencil and cut-paper godfather Scott Williams and artist/poet Marshall Weber, CUBA’s books have reached new audiences through distribution by Booklyn Artists’ Alliance. His archive is extremely diverse, being filled with original drawings, sketchbooks, small paintings, and photographs. This collection documents one of the most productive artists and teachers on the graffiti scene.

CUBA’s unflagging optimism and positive attitude and his universally acknowledged courage, integrity, and generosity have made CUBA one of the best-respected graffiti writers across three generations. 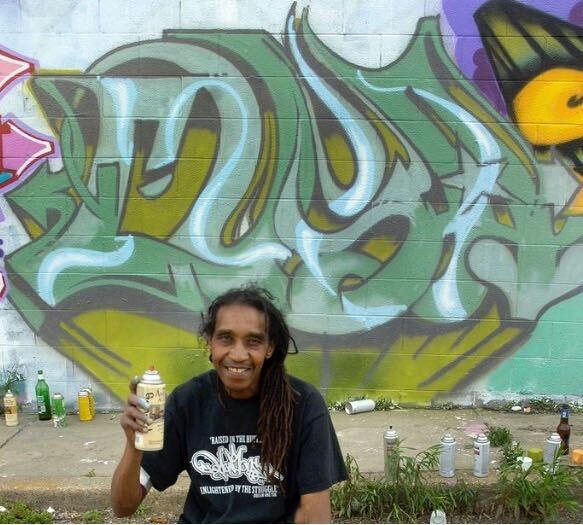 I Want No Illusions About My Place in the World

The Worst is Yet to Come

Slaughter of the Trees

School of the Museum of Fine Arts (SMFA) at Tufts

Blam Blam: The Past is Cold

We Hunger, We Suffer & We Thirsty

Play With Our Minds

The University of Iowa (UI)

Pick Yourself Up from Off the Ground

The University of New Mexico (UNM)

The University of Texas at San Antonio (UTSA)

NO XMAS FOR AMERIKA

Hard WorkBlam Blam: The Past is Cold

University of Colorado at Boulder

Colonial Regime, We Know Them Scheme

Slaughter of the Trees (large format)